We are the Antarctic Station, a society of hundreds of Civil Emergency and Defence Agency (CEDA) reporters based in Atarctica that broadcasts to the whole world though a network service accessible by a large network regulated by the communications department of CEDA. Our members document news ranging from outbreaks to progress made on a potential cure by the Center for Disease Control and Prevention (CDC). Our society has access to many resources all over the world and we are dedicated to updating the world through these hard times. Keep safe, world, and hold out as long as you can.

One of our reporters captures this photo while being evacuated out of Camp Sydney, one of the remaining CEDA safe camps that had just been overrun from the inside 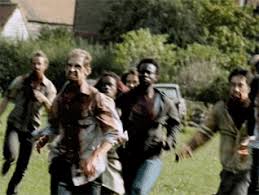 Working theories of how the highly quarantined camp became comprmised are

Though these are highly unlikely, many CDC and CEDA officials have stepped up efforts to quarantine infected areas and to increase security at worker check-in.

After analyzing various documents left behind by the San Marino Station, an early broadcasting station that fell near the beginning of the apocalypes, we have stumbled upon a shocking news article that were some of the last updates they posted before the contamination breach in their facility. We are posting these documents here today in memorial to our fallen reporters lost on the dawn of the contamination. The lone survivor, Doctor Morrison, was enroute to our facility as he heard of the fate of his colleagues. Here is their Last Broadcast

Through these hard times...

One of our senior reporters are reccomending this comic to the children out there. The CDC has prepared us for the zombie apocalypse in many different ways as it seems...